Ahead of Thursdays general election we asked UKIP their thoughts on Driver CPC. And for all they get my vote I don't obviously agree with their policy of scrapping DCPC altogether although they do concede that elements of the CPC are "valuable".

We haven't contacted the other parties, but may well do after the outcome of Thursdays election result once the make up of the new government becomes clearer.

I am a director of a Driver Training company in the North East of England and was wondering what U.K.I.P.'s policy on Driver CPC was? Should your party be in a position to influence this particular policy after May 7th. (EU Directive 2003/59/EC)

There are aprox' 680,00 drivers (lorry and bus) all of voting age who would be very interested to know your answer to this question.

I keep in regular touch via email marketing software the 1000 or so drivers locally we have trained.

If you would be so kind as to reply to my email could I have your permission to post the reply on my website ?

And regardless of your reply you have my vote - Good luck on Thursday 7 May 2015!

Thank you for your enquiry about the Drivers CPC.

Being in the business you are, I am afraid you might not appreciate UKIP policy on the DCPC as we are committed to scrapping it. Our manifesto statement is:

“The Driver Certificate of Professional Competence (DCPC) is an expensive second-tier requirement, which is causing job losses, because of the added administration and expense to hauliers. We will scrap the DCPC for professionally licensed drivers.”

We do however believe some of the elements of the CPC are valuable and would like to see these applied as part of training for the PSV and LGV licence.

Please follow this link to UKIP’s fully costed and independently verified manifesto where you can find all of our transport and other policies.

Thank you for your support and you are of course welcome to use this reply on your website.

VOSA and DSA to merge

Today, Roads Safety Minister Stephen Hammond announced that the Vehicle and Operator Services Agency (VOSA) and Driving Standards Agency (DSA), are to merge into a single agency which will bring together their testing and standards services.

Alastair Peoples, VOSA Chief Executive, will become Chief Executive for the two agencies and will oversee their strategic operations towards a full merger over the next year

Rosemary Thew, DSA Chief Executive, has also announced that she will be stepping down and leaving the Civil Service on 30 June 2013.

“I welcome the opportunity of working with both agencies to bring together the vital road safety services we provide.

The aim of combining the two agencies is to remove duplication of functions, improve efficiency and give our customers a simpler framework of agencies in which to work with. I will now begin the process of working with staff and stakeholders to develop proposals to combine the work of VOSA and DSA.

We will continue to provide a quality service and the same level of professionalism while taking forward this work”.

No impact on our services

The changes won’t impact on:

·         the services you use that are provided by VOSA and DSA, eg vehicle tests

·         progress of other ongoing reform programmes

The reforms are an outcome of the recent motoring services strategy consultation. They’re designed to offer motorists and businesses better and more convenient services, while making sure that road safety and first class customer service remain a top priority.

Two former directors of a transport company have been order to pay £1,835,793.00 by HH Judge Hughes following a Proceeds of Crime Act (POCA) hearing at Carlisle Crown Court.

On 25 March 2013, 67 year old Patrick James Boyle and 38 year old Mark Anthony Boyle, who are both from Newry, Northern Ireland and former Directors of Boyle Transport Limited, were found to have benefitted from their criminality to the sum of £10,016,810.

On 2 May 2012 Patrick Boyle and Mark Boyle were handed two year and 18 month sentences respectively at Carlisle Crown Court, after they pleaded guilty to conspiring with drivers to make the false tachograph records on 18 February 2011.

After a year long investigation, It was revealed that each digital tachograph owned by the company had been interfered with and the drivers had, in fact, been driving up to 22 hours per day (the law states the maximum should be 10 per day) and failing to take their lawful breaks.

Heather Cruickshank, VOSA’s Operations Director added: “Operators and drivers should be in no doubt that if they choose to work outside the law there will be serious financial consequences as this case highlights. VOSA's number one priority is road safety and our investigators will always seek to take robust action against those who risk the lives of other road users through arrogance or just blatantly ignoring the rules.”

e-Petition to Scrap Driver CPC Has Been Rejected

A West Midlands truck driver who had created an online petition on the Governments website has had his e-Petition scrapped. Tony Thompson, a driver at a Walsall-based small haulage firm, said he was spurred into action after discovering the “high level of discontentment” from his peers up and down the country. 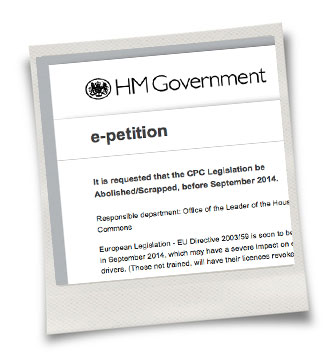 Mr Thompson had put forward some valid points in his posting, but the e-petition , which had managed to obtain only 65 signatures has been rejected with the following reason given: "E-petitions cannot be used to request action on issues that are outside the responsibility of the government."

We read that as meaning it's an European Union Directive that is out of the hands of the UK Government.

Government is starting to step up it's warnings to drivers as the deadline(s) for Driver CPC approach.

You face being fined up to £1,000 and even losing your livelihood if you don’t finish your training in time, the Driving Standards Agency (DSA) has warned. 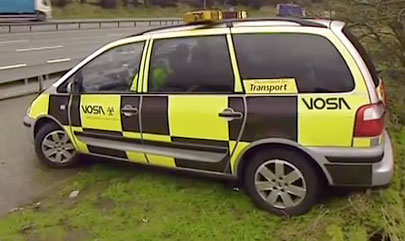 The Office of the Traffic Commissioner has also reminded operators to be aware of their drivers’ training hours and deadlines to avoid penalties.

Failure to meet a Driver CPC training commitment has led to a haulier having his licence suspended. The case shows the growing importance of DCPC in road haulage regulation.

John Thomas Foster, trading as JD Freight based in Washington, had his four-truck operating licence suspended from November 30 until it could demonstrate that all its drivers had completed seven hours’ DCPC training. The training must include driver walk-round checks.

In June, following various infringements, he had promised North East traffic commissioner Kevin Rooney that a DCPC training programme would be in place by the end of October. But no training had taken place.

The above article highlights the importance of completing Driver CPC Periodic Training, to ensure that you remain compliant.

The fee for calibration and periodic inspection of tachographs will be deregulated from 1st January 2012, following a consultation with the industry.

It is expected that deregulation of the fee will:

From January the fee charged by Approved Tachograph Centres will be a commercial matter to be agreed with the customer presenting the vehicle.

The existing fees are still in place up to and including the 31st December 2011.

“Deregulation will benefit the industry, giving tachograph centres the opportunity to recoup their costs while providing a more flexible service to the customers.”

A summary of the consultation responses can be found on Business Link by clicking on the attached link (http://www.vosa.gov.uk/tachograph-fee-deregulation)

Meeting EU driver training requirements is a ‘major concern’, second only to rising fuel costs, for nearly half of Freight Transport Association members, the association has reported.

By September 2014 all lorry drivers in Europe must have completed 35 hours of training in compliance with Driver Certificate of Professional Competence.

The DCPC was introduced over two years ago, but industry concerns – including an annual driver employment churn in some sectors of up to 20 per cent – have made industry reluctant to invest in this compulsory training.

Isobel Harding, FTA’s national training manager, said: “While awareness of these training obligations is high, there is a manifest reluctance from industry to invest in training drivers when there is a good chance that by the time the deadline comes around those same drivers might be working elsewhere.

“But this approach could leave many companies twisting in the wind as the deadline approaches and demand for good value and meaningful training outstrips supply.”

Latest figures from the Driving Standards Agency show that the number of qualified HGV drivers could be well short of the 35 hours mark approaching the 2014 deadline.

Harding said: “The current gap of five million training hours is getting worse and we predict there could be as much as a 30 per cent shortfall in the number of legally qualified drivers of heavy goods vehicles before 2014.

“Should this happen, the impact on the UK economy could be devastating, with a downturn in productivity coupled with loss of sales for many millions of businesses that depend on road haulage.”

A consultation on the implementation of new EU rules covering the licensing of lorry, bus and coach operators was announced today by Roads Minister Mike Penning.

The European rules under which hire and reward operators are licensed are being changed by a new EC Regulation coming into force in December 2011. This includes a requirement for all member states to establish a national register of operators as already exists in the UK. It will also require other member states to act on information from UK enforcement agencies when operators commit infringements.

Mike Penning said:- “The operator licensing system exists to make sure that the buses, lorries and coaches using our roads are operated safely and legally.

“These new EU measures will help to level the playing field for UK operators by making sure that there are effective mechanisms in all member states to allow enforcement agencies to report illegal activity by foreign vehicles.

“Our proposals for the implementation of these new EU rules will help to strengthen the operator licensing system and improve road safety without imposing unnecessary burdens on industry.”

The consultation started 4th April 2011 and seeks views on how the new rules can best be implemented by the Traffic Commissioners,who issue operator licences and take enforcement action against those who break those rules